"The Rochester Mob Wars" book is available locally at:

For more in depth information on past and future events connect with me on FACEBOOK.

The Hammer Conspiracies book (in mint condition) is now available for $50 plus S&H.

The Black Hand Society of Rochester 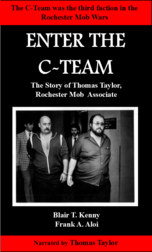 Scheduled to be released in early 2020 "ENTER THE C-TEAM" is the story of Thomas Taylor and the third faction in Rochester's Mob wars labeled The C-TEAM. In the book Taylor describes his relationship to various Mafia members including Sammy Gingello, whom he was bodyguard and driver for, Joey Tiraborelli whom he had a "beef" with and others who tried to "whack" him, leading to the formation of the C-TEAM. Included is the planning and execution of the Fiorino murder, committed by Joseph "Mad Dog" Sullivan.

I am pleased to announce that I am currently working with Frank Aloi, author of "The Hammer Conspiracies" on several projects. We are co-authoring a new book about the C-Team faction of the Rochester Mafia conflict tentatively titled "Enter The C-Team." The book is scheduled to be released in early 2020. Frank also intends to release some previously published works as well as some unpublished work. Stay tuned and visit the FRANK ALOI PAGE for more information. 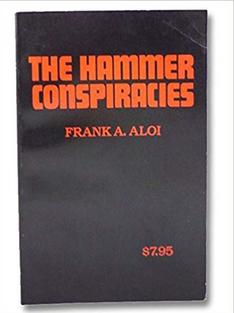 Fresh from the archives of Frank A. Aloi himself never read or circulated copies of "The Hammer Conspiracies" are now available. These books are all in mint condition. On sale now for just $50 plus S&H. These books are currently selling on Amazon in used condition for $90-$200.