William Constable was murdered on December 14, 1970

Police investigators view the body of Dominic Alloco who was found in a field in Walworth, New York on February 23, 1965. 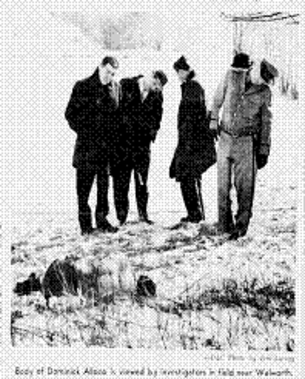 On November 23, 1973, Eugene DiFrancesco shot Vincent Massaro to death in the Bar-Mon Construction Co. garage, a premises owned by Angelo Monachino. Massaro was killed with a handgun, equipped with a silencer provided by Rosario Chirico.

On November 28, 1973,  Officer John Donlon of the Rochester, NY Police Department made a grisly discovery in the trunk of a car parked at 203 Atkinson Street in the city of Rochester.  The body of reputed Rochester mafia member Vincent “Jimmy the Hammer” Massaro was found dead with half of his face blown off, stuffed in the trunk of his own car. He had been shot eight times in the head at close  range. 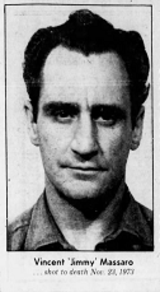 Excerpt from a May 14, 1976 Democrat and Chronicle Newspaper article.

Jake Russo disappeared on September 12, 1964 and was presumed to have been murdered. 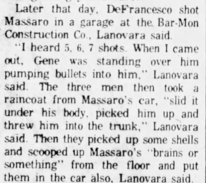 Book about the Massaro murder. 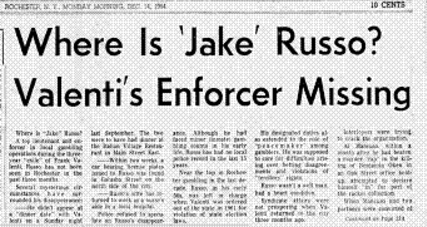 In the early morning hours of April 23, 1978, “B Team” members Thomas Didio, Angelo Vaccaro, Dominic "Sonny" Celestino and Frank Frassetto placed a remote control device under Salvatore "Sammy G" Gingello's vehicle, which was parked in a lot in front of Ben's cafe Society, at Main and Stillson Streets  in Rochester, N.Y.
At approximately 2:30 a.m., Gingello and his two “A Team” bodyguards, Thomas Taylor and Thomas Torpey, returned to the vehicle. As Gingello and his associates entered the vehicle, the device was remotely detonated.
The force of the explosion amputated Gingello's right leg and nearly severed the left leg at the thigh. Within 20 minutes, Gingello died at Genesee Hospital as a result of the severe injuries suffered in the explosion. Thomas Taylor and Thomas Torpey suffered less extensive injuries. The following day Dominic "Sonny" Celestino was reputed to have stated that if he had placed the bomb properly, he would have "gotten all three of them bastards."

A former driver and  bodyguard of Sammy Gingello, Thomas Didio (B Team) was machine-gunned to death at the Exit 45 Motel on July 6, 1978, for refusing to relinquish control of the Rochester Mob after his former bosses were all released from jail.

After Several reconnaissance missions following Didio's girlfriend to the motel, "A Team" members Anthony Colombo and Anthony Oliveri waited in the woods for several hours before approaching the motel room that Didio was staying in. Oliveri stood guard with a shotgun while Anthony Columbo sprayed the entire room with a machine gun, killing Didio.

Visconte, Ricky was shot to death on March 11, 1969 and dumped from a car at Hayward Avenue and Fourth Street last night. Investigators identified him as Enrico G. "Ricky" Visconte, 40, who had been living at 228 Verona St. He was slain about a half hour after he dropped his mother off at a bingo game. He was shot in the head and hip and was pronounced dead at the scene. The slaying was attributed to Rochester Mafia “hit man” Jimmy “The Hammer” Massaro who apparently had a thing for Ricky’s girlfriend but allegedly killing her as well. 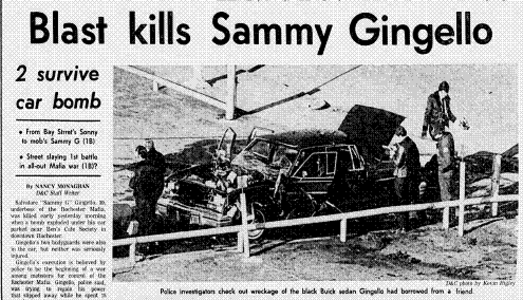 William "Billy" Lupo Was murdered in April of 1970

Vincent "Jimmy The Hammer" Massarro was murdered on November 23, 1973 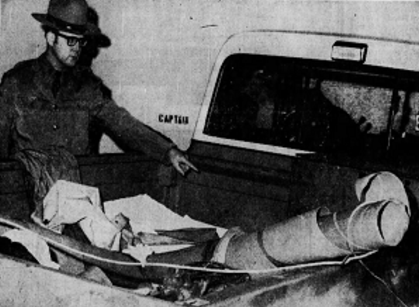 John J. “Broadway” Cavagrotti disappeared on September 21, 1967 and was presumed dead. He was last seen getting into a car with Sammy Gingello who was a suspect in the disappearance, although he was never charged.(24)  Cavagrotti reportedly failed to fall into line when Frank Valenti took over Rochester’s rackets in 1964.
By fall into line, I mean of course to succumb to extortion. In 1964, Frank Valenti and his enforcers organized all gambling in the city of Rochester. They forced every proprietor of a gambling establishment to share a portion of their weekly earnings with the Rochester Mafia or they were closed down, beaten up or killed.  In this case, John Cavagrotti was made an example of, and was murdered. 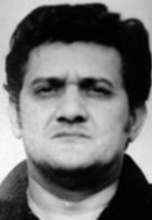 Dominick “The Deacon” Alloco was a mafia muscleman. He was a gambler who “owed” huge sums of money to other mobsters. For that reason, he was not welcome at most of the gambling establishments in Rochester at the time.
He was tied up and shot in the head, then dumped in a field near Walworth, New York on February 23, 1965.

In April 1970, William Lupo was shot to death in Rochester, N. Y. He was found slumped behind the steering wheel of his car, shot in the head four times. It was noted at the time that Salvatore "Sammy G" Gingello immediately replaced Lupo as "Capo" of the strong arm unit of the Valenti Crime Family. The last vestige of the Jake Russo era was eliminated with Lupo’s death.  At the time of his death,  Billy Lupo was under Federal Investigation for loan sharking. Angelo Monachino would eventually be charged with his murder five years later. 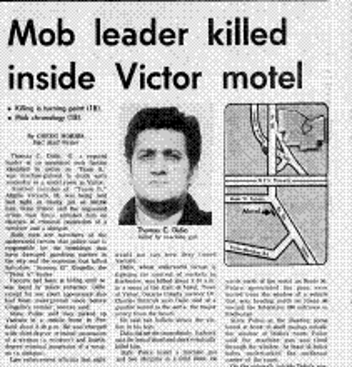 Constable, William T. “Billy” was murdered on December 14, 1970 by Jimmy “The Hammer” Massaro, for allegedly attempting to muscle in on mob enterprises.
He was an employee of Angelo Monachino, who owned Bar-Mon Construction.  Bar-mon construction has been associated with Frank Valenti, “Boss” of the Rochester Mafia. Valenti is the owner of several of Bar-mon’s bulldozers. Angelo Monachino is also a “made” member of Rochester’s Mafia.
Charles Monachino fingered his brother Angelo and Albert DeCanzio for the Billy Constable murder, although Jimmy “The Hammer” pulled the trigger.  Monachino and DeCanzio were indicted on April Fools Day 1975 along with Gene DiFrancesco and Frank Valenti for the murder.

In early 1973, Al DeCanzio, Charles Monachino and others, planned a robbery of the Irondequoit, N.Y. office of the Department of Motor Vehicles. They carried out that crime on March 30, 1973. The actual crime was committed by Ernest White and Reginald Hawkins, using White's car for transportation.
During the robbery White and his car were identified by witnesses and a warrant for his arrest was issued. The conspirators feared that White would talk if he was arrested and they summoned him to the garage of the construction company where they worked.

Telling him that they intended to make it look as if he had been kidnapped, and thus allay suspicion of him. DeCanzio and Monachino tied up White with his permission, placed him in the trunk of a car belonging to DeCanzio's wife, and then DeCanzio fired three bullets into White's head. The body was dumped into a manhole, near the Clarissa Street Bridge where it was discovered several months later.